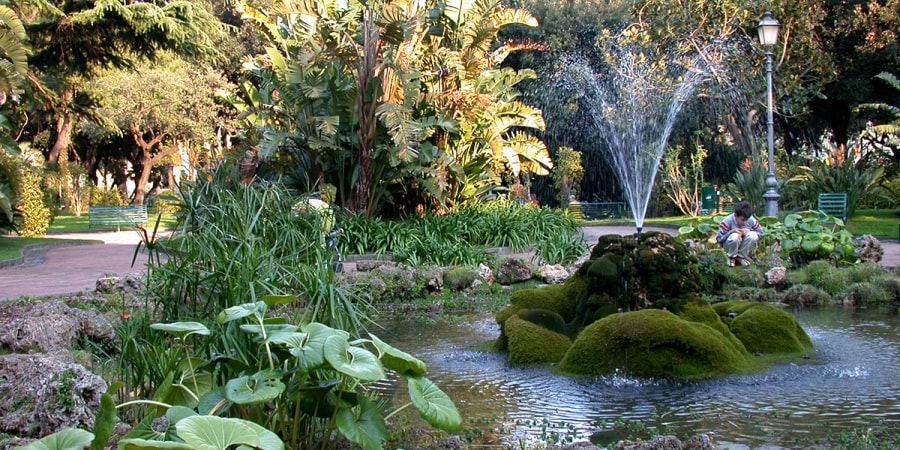 Designed in 1874 by architect Casalbore, the Villa Comunale of Salerno, historically was one of the main areas of connection of the ancient city with the other urban centers located in North-East, first of all the capital Naples. The famous fountain called Don Tullio, or Esculapio, was in fact built in 1790 to provide refreshment to people coming from the sea and to the travelers of the road.

Over the years, the villa has been enriched by other monuments dedicated to famous historical and botanical species, becoming a meeting place. During the 90s the Villa Comunale was involved in a botanical and architectural restoration particularly prestigious that has seen the expansion of the green, and destined to radically redeveloped botanical garden with the addition of new rare plants, related to Mediterranean culture and the restoration of the central fountain and other monuments.

It has done so, moreover, the redesign of the avenues and the rebuilding of the whole pavement, extended to the gates of the City Theatre "Giuseppe Verdi" to which the Villa is connected by a charming pedestrian path, or cross D'Agostino.

From November to January, the Villa Comunale of Salerno is transformed into an "Enchanted Garden" thanks to the event "Luci d'Artista", an exhibition of bright artworks that traditionally lights the salernitan nights over the Christmas period. The garden captivates viewers with its bright floral wonders, every year more and more rich, that fairies and magicians with their magic wand bloom on the branches of trees and bushes bare for the winter in sinuous and wavy plant forms. A fantastic and sparkling garden with a thousand wonders that surprises and delights with its lights and colors who is walking it. At other times of the year, especially in the warmer seasons, the Villa Comunale hosts other events, especially exhibitions of flowers and rare plants such as the "Exhibition of Minerva" and exhibitions of local crafts.

Ticket price: free
Opening Hours
NOTE: The entry is allowed up to 30 minutes before the closing time.