The construction of the Teatro Municipale Giuseppe Verdi was approved by the City Council of Salerno on December 15, 1863 on a proposal of the then Mayor Matteo Luciani.

The design and direction of the works were assigned to the architects Antonio D'Amora and Giuseppe Manichini that they based their theory on measurements and proportions of the Teatro San Carlo in Naples. The works of decoration were instead directed by Gaetano D'Agostino. The theater was inaugurated on April 15, 1872 with the performance of Rigoletto; March 27, 1901 the theater was named after Giuseppe Verdi, who died January 1st of that year.

Unusable due the earthquake of 1980, the theater was closed for 14 years. It was renovated and re-opened July 6, 1994, during the celebrations for the 50th anniversary of Salerno Capital. The restoration has brought to light the particular historical and artistic that make it even more valuable nineteenth-century Theatre, among the few in Italy, perfectly preserved. 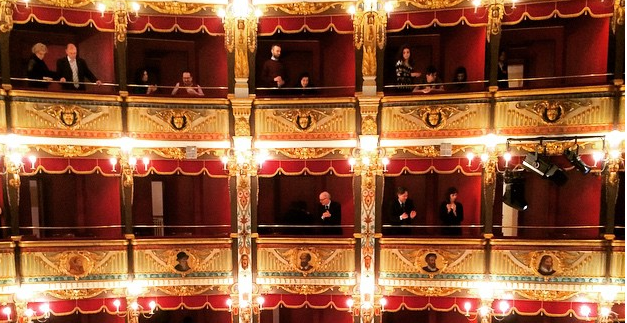 The theater is now home, in addition to the Opera Season, Ballet and Concerts, theater seasons, festivals, concerts, events for young people, workshops, research seasons. Thousands of students have come to know and appreciate, thanks to guided tours. The sensitivity of the municipal administration has meant that the city finally find a temple of music and culture. A culmination of a historical journey of music, has come on the occasion of the tenth anniversary, the appointment of an artistic director of the caliber of Daniel Oren, which gives the opera theater Verdi proper international resonance.