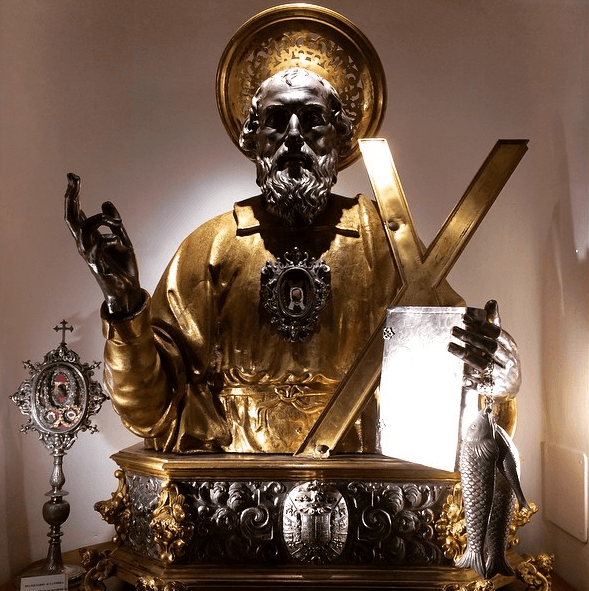 The Cathedral of Amalfi is the best known monument of the Amalfi Coast in the world, a tourist destination key for those who want to undertake fundamental historical - artistic itineraries offered by the province of Salerno.

The Cathedral, dedicated to Sant'Andrea, was built in the ninth century, when the Maritime Republic began to establish itself as a trading power. It was completely renovated in 1203, in the forms introduced by the Arab-Norman conquerors. Remodeled around 1570, it was rebuilt in 800 after a disastrous collapse occurred in mid-century.

The Cathedral has a beautiful Romanesque bell tower, completed in 1276, covered with mosaic tiles and restored in 1929. Beyond the porch is located the entrance to the Cathedral, in bronze, from Constantinople, as a gift of a patrician of Amalfi.

Proceeding to the left we find: the delicate Mother of Pearl Cross brought from the Holy Land by Mons. Marini, the Baptistery in red Egyptian porphyry and in the lateral chapels paintings by Silvestro Mirra and his pupils. In one of the pillars we can find a hidden column, an example left to show the ancient Romanesque structure hidden under the marble. Passing to the central nave, we admire the High Altar made from the sarcophagus of the Archbishop Pietro Capuano who died in 1359 A.D. and the eagle on the lectern of the same provenance. Passing to the right hand nave, almost at the end there is the bust of St. Andrew of the XVI century. Beside the door a large painting of St. Andrew and St. Mathew who saved Amalfi menaced by the terrible pirate Kairen-Din “Red- Beard”; every year on the 27th of June the people of Amalfi remember the event with a grand festivity in honour of their Patron Saint.