Visiting the Ruins of Pompeii, Italy

Explore Pompeii ruins with a self guided tour

Explore one of the world’s best-preserved archaeological sites 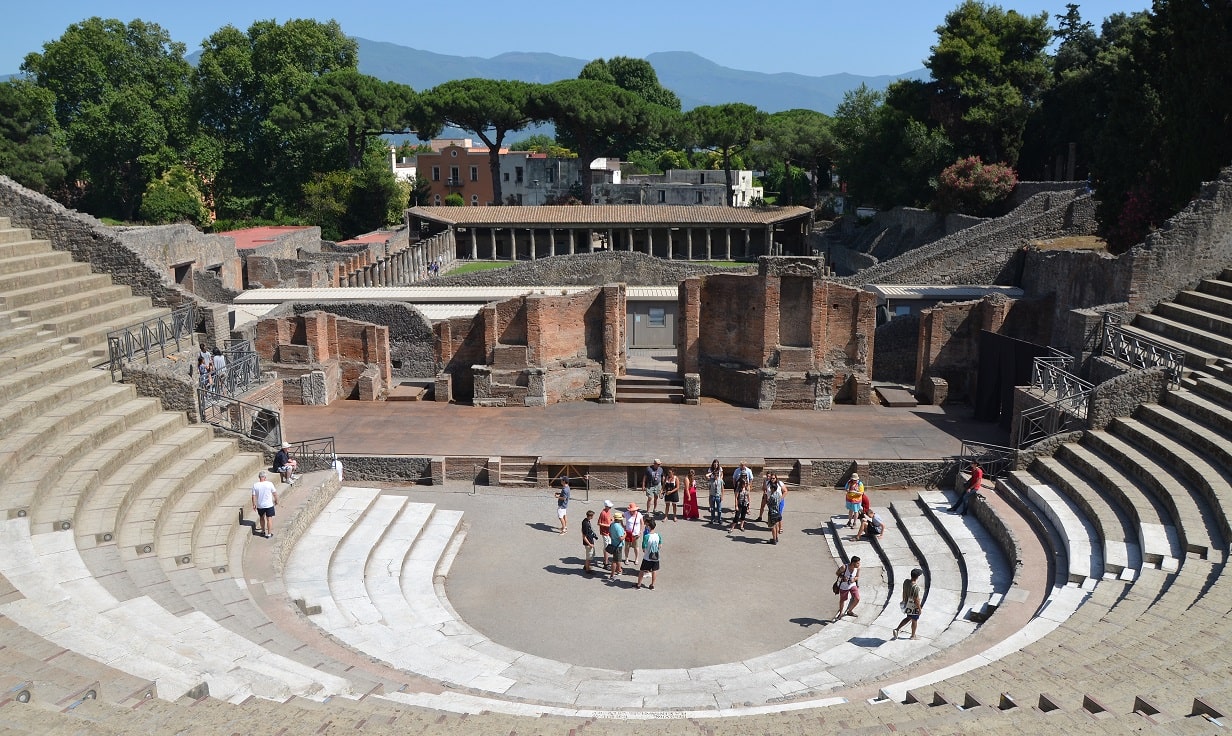 The ghostly ruins of ancient Pompeii make for one of the world's most engrossing archaeological experiences. Few archeological sites offer a more immersive travel experience than the excavated ruins of Pompeii southeast of Naples, Italy. In 79 A.D., the volcano Vesuvius erupted, covering the Roman City with 12 meters (40 feet) of fine ash, which preserved the buried city and its asphyxiated residents intact for nearly 1700 years. Much of the site's value lies in the fact that the town wasn't simply blown away by Vesuvius in AD 79 but buried under a layer of lapilli (burning fragments of pumice stone). The result is a remarkably well-preserved slice of ancient life, where visitors can walk down Roman streets and snoop around millennia-old houses, temples, intricate details about the everyday lives of Pompeii’s doomed inhabitants, shops, cafes, amphitheatres and even a brothel.

The archaeological ruins of Pompeii covers about 440.000 square meters, really a vast area that would take, even an expert tour guide, at least two full days to explore it completely. So before starting your visit to Pompeii, you can easily take a note about the most famous sites you must see, that will give you an idea of what daily life was like in this old Roman city. Among the many squares, temples, private villas, and thermal baths, here following we suggest few sites that you should absolutely include during your visit to the Pompeii excavations.
The free Google Map below will help you discover the city of Pompeii easily and efficiently.

Self-guided walking itinerary of the ruins of Pompeii

The self-guided walking route that we’ve established will take you across the 9 must see attractions at Pompeii ruins, which stretches around 3 kilometres and it starts from Piazza Anfiteatro.

The old Pompeii Amphitheater, that could seat about 20,000 spectators, was the place where people would go to watch gladiatorial battles and games, and it's the oldest surviving Roman amphitheater. In AD 59, there was a riot in the amphitheatre, in which spectators from Pompeii and the nearby town of Nuceria fought each other, with the result that the Emperor Nero banned games at Pompeii for 10 years.


3. Garden of the Fugitives - Plaster Casts

The Orto dei Fuggiaschi (Garden of the Fugitives) was an old quarter of the city that has been converted to vineyards as Pompeii grew. The name is an homage to the bodies of 13 victims of the eruption in 79 AD who were trying to escape through Porta Nocera before succumbing to the ashes and stone. Their remains where discovered during excavations in 1961-62 and 1973-74, using plaster casting methods.


4. House of the Menander

The House of Menander gets its name from an affresco of the poet Menandro and is one of the richest and most magnificent houses in ancient Pompeii in terms of architecture, decoration and contents, and covers a large area of about 1,800 square metres. Of great interest are the affrescoes depicting the Trojan war, the death of Laocoonte, Cassandra and Ulysses: Cassandra trying to convince the Trojans not to bring the wooden horse through the city walls.

Pompeii's two theaters are located in the same area of the ancient city. The Teatro Grande (Large Theater) is an open-air amphitheater where Greek-Roman games were performed; the smaller Odeon was used for poetry and musical performances, which required a smaller and covered space for the best acoustics.

The Pompeii thermal baths, known as "Therme Stabiane", were the city's public baths, where a major part of Pompeii daily life for its citizens took place. There were relatively few private baths and these were limited to the most well-to-do families. The thermal bath buildings were divided into two sections: one reserved for women and one reserved for men. Each of these contained a series of rooms with different functions: apodyterium, frigidarium, tedidarium, calidarium. 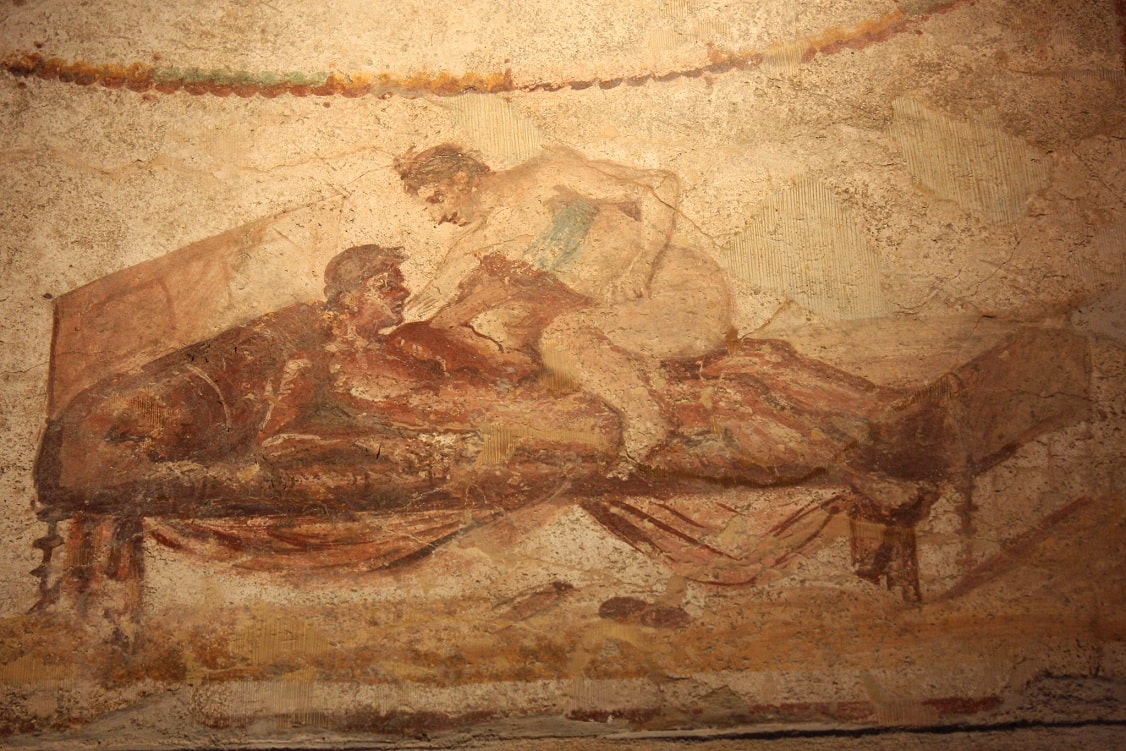 The Forum is near the entrance in Piazza Esedra of Pompeii. The Forum was the political, commercial, and social center for the old city. There are lots of relics to see at this site, and it's located right near the main entrance at Porta Marina

The Casa del Fauno (House of the Faun) is one of the most spectacular and largest houses in Pompeii, covering around 3,000 square meters. This is the biggest and most majestic house in Pompeii, and it shows great examples of how a house would have been set up architecturally. It´s worth to take a look in the backyard to see statues, frescoes, and mosaics showing a battle scene. 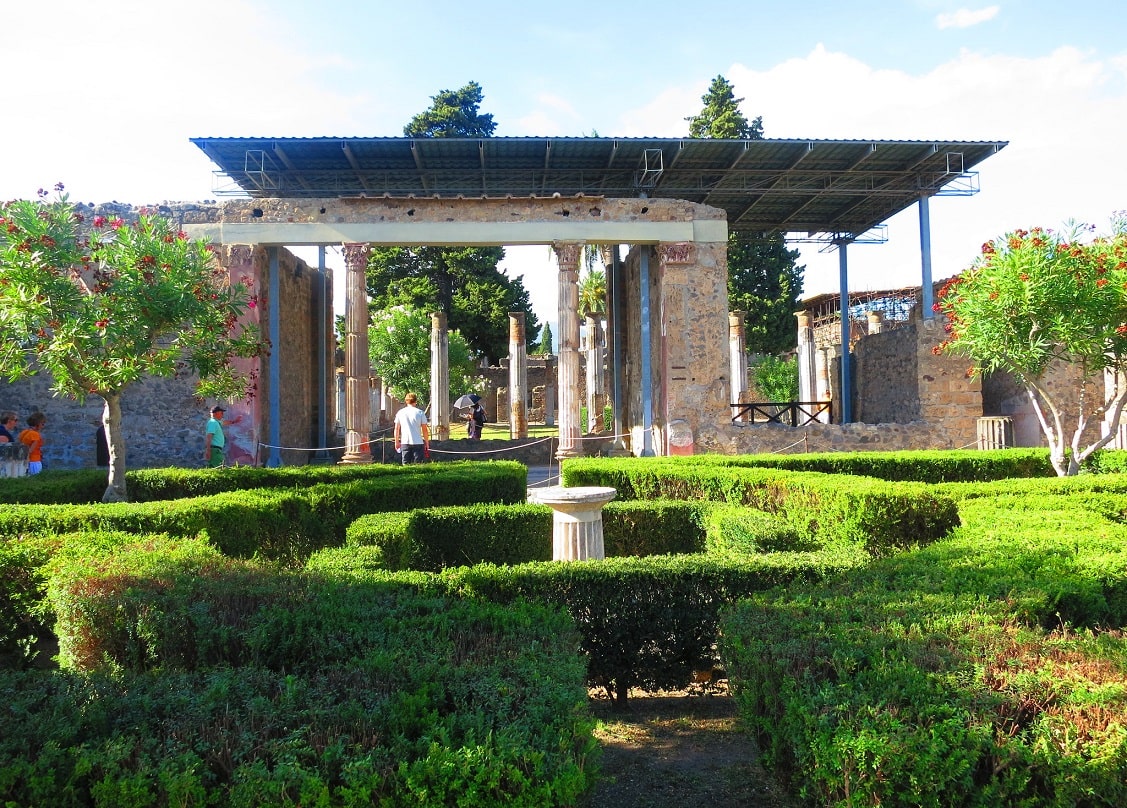 10. Villa of the Mysteries

Villa dei Misteri (Villa of the Mysteries) is one of the most captivating and mysterious in the entire Pompeii ruins, and probably belonged to the Istacidii family, one of the most powerful in Pompeii during the reign of Augustus. 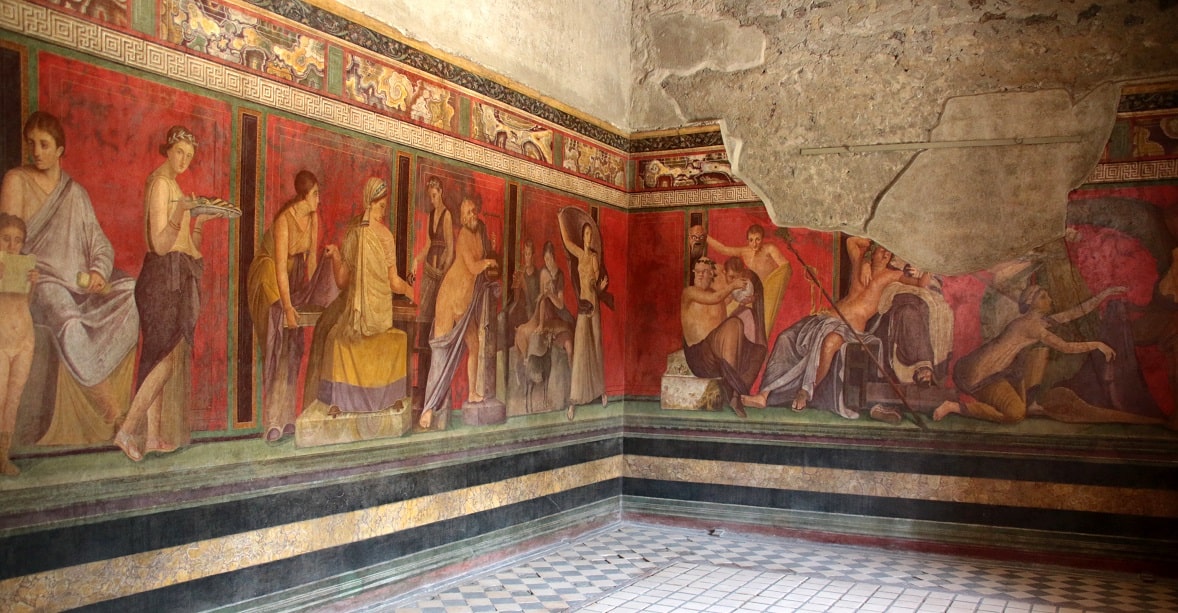 How to get to Pompeii Ruins

Where are the Pompeii ruins?

Getting to Pompeii from Naples

The train is the easiest mode of transportation when it comes to traveling from Naples to Pompeii. Once you arrive at the main station in Naples (Stazione Centrale), you'll want to look for the Circumvesuviana train, as this is the one that will take you right to Pompeii. The train takes about 35 minutes and you'll get off at your stop "Pompei Scavi/Villa dei Misteri". Few minutes away from the train station you'll find the main entrance to Pompeii ruins.
You can also take the SITA bus from Naples to Pompeii.

Getting to Pompeii from Sorrento

There are 2 ways to go to Pompeii ruins from Sorrento:
1. Taking the Circumvesuviana train which runs from Sorrento to Naples, and in about 20 minutes you'll arrive at Pompeii stop "Pompei Scavi/Villa dei Misteri". The main entrance to the archaeological site is right across from the Circumvesuviana station. Fare is around €3 each way.
2. The second option is to get a taxi. It costs about 70 euros. Not cheap but surely comfortable.

Getting to Pompeii from Amalfi Coast

Getting to Pompeii from Amalfi Coast is relatively easy, it will take 1-2 hours depending where you stay on the coast:

Getting to Pompeii from Salerno

Getting to Pompeii from Salerno, you have to know that there is also a direct train. However, it arrives in Pompeii in a different station than the train from Sorrento or Naples (Circumvesuviana). This train is operated by Trenitalia, which is the Italian national train operator. The train takes 42 minutes each way. After you arrive at Pompei Railway Station, the eastern entrance to Pompeii ruins is 10 minutes walk away. Please note that the entrance is not the main entrance "Porta Marina" mentioned above.

Visit Naples - what to see and do