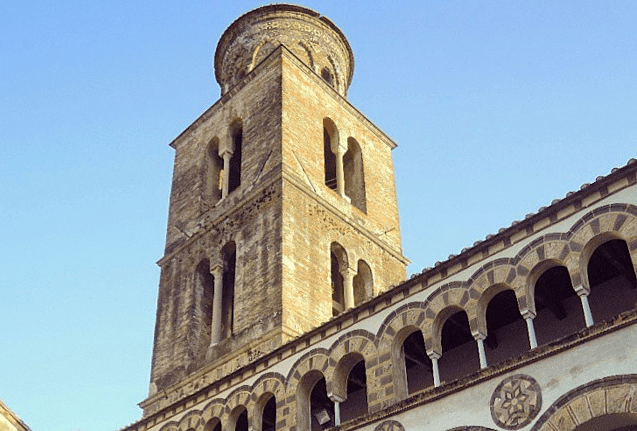 The St. Matthew Cathedral founded by Roberto the Guiscard and consecrated by Pope Gregory VII, was officially opened in March 1084. The present structure dates back to the earthquake of 5 th June 1688, when it was completely rebuilt. The main entrance has been altered and the courtyard is surrounded by a covered walkway supported by twenty eight plain columns with arches and a series of Roman tombs around the walls. On the southern side of the cathedral stands the bell tower which dates back to XII century.

You access the cathedral through a bronze byzantine door. In the centre nave are the celebrated amboni decorated with sculptures and mosaics dating back to the last decade of the XII century. In the Treasure Chapel, one can admire the many gothic relics including St. Matthew's arm and the statue of the Salerno Martyrs. The crypt is situated under the main alter. The crypt area is made up of nine rows of three bays with a cross shaped vault which rests on pillars. It was restored by Domenico Fontana, who designed the vault in alternate octagonal and circular sections surrounded by stuccoes and paintings. He designed the double main alter where two masses can be celebrated simultaneously.

In order to respect the silence and recollection due to the sacredness of the place: