The fabulous coast between Positano and Vietri sul Mare, with its characteristic road made of hairpin bends and breathtaking views of the sea, is still among the most glamorous and renowned summer destinations in Europe. The landscape beauty is fortunately combined with the beauty of the Amalfi Coast accommodations, many of them able to offer a high level of professional service, breathtaking views, sunsets that remain in the memory and unexplainable emotions.

The Amalfi Coast is there to surprise you, but be careful when selecting your hotel, choosing the one with the best view is never easy, especially when there are many that offer amazing views. So we are going to discover the best Amalfi Coast hotels with best panoramic view, from where you can have an incredible view over the sea or the immensity of this corner of paradise.

Best selection of hotels with panoramic views on the Amalfi Coast

Before deepening the argument it is good to note that the ranking of the hotels with best panoramic view in Amalfi Coast refers only to the quality of the view offered and not to the service of the accommodation, of course if you fall in love at first sight of one of these, you will have to book immediately, since they are in any case very appreciated! 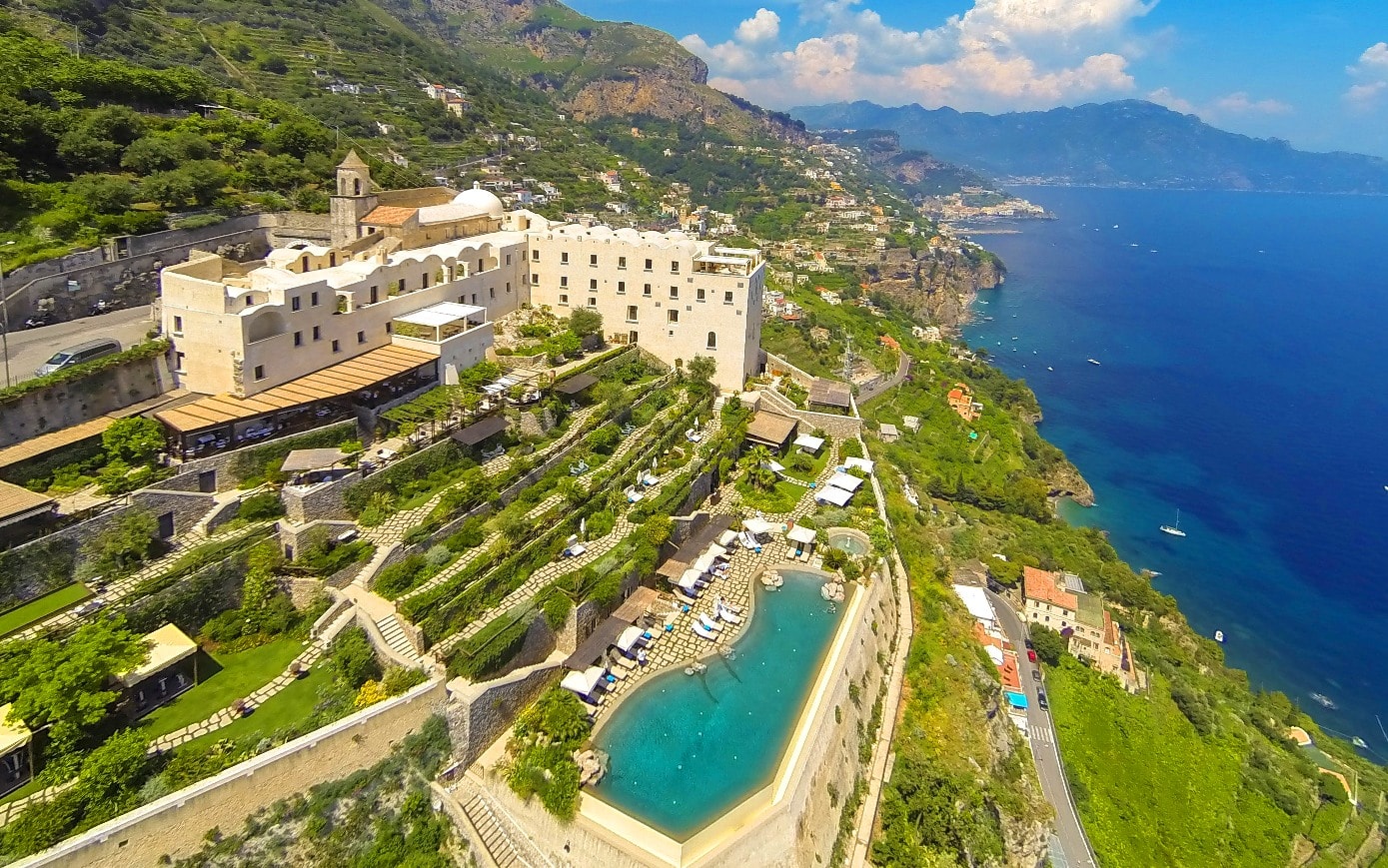 Overlooking the sea, situated on a cliff in the village of Conca dei Marini, this one of the most exclusive hotels on the Amalfi Coast. With only 20 accommodations overlooking the sea, a wonderful spa and a heated infinity pool, it is perfectly integrated with the coast, so much so that you can feel the fusion between the surrounding nature and the Gulf of Salerno that opens up before you. 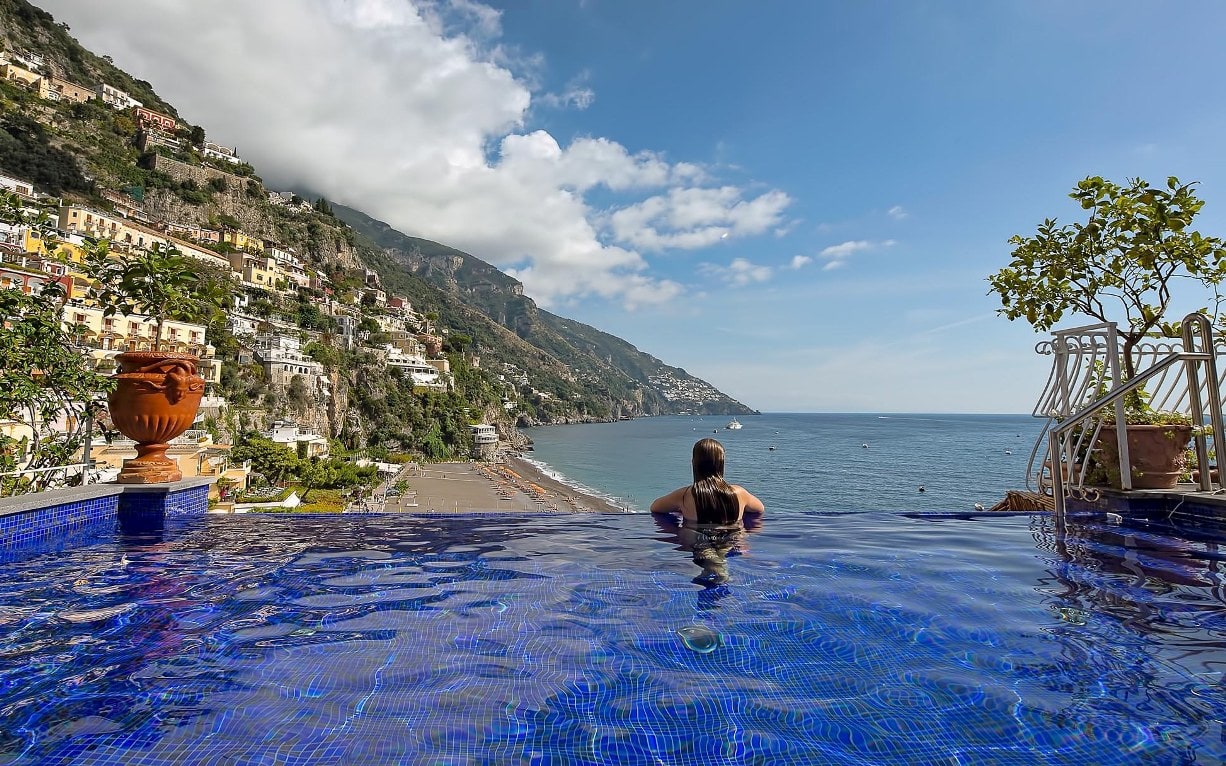 The elegant Hotel Covo dei Saraceni has the best view of Positano's main beach: Marina Grande of Positano. Perched on a small cliff that reaches down to the sea, in the heart of Positano, the hotel Covo dei Saraceni with its swimming pool gives the illusion of having spent the day at the beach. The strategic position allows what is an exceptional panoramic view of the Li Galli island . The hotel's restaurant is also not to be missed, guaranteeing one of the most romantic views of the entire bay of Positano. 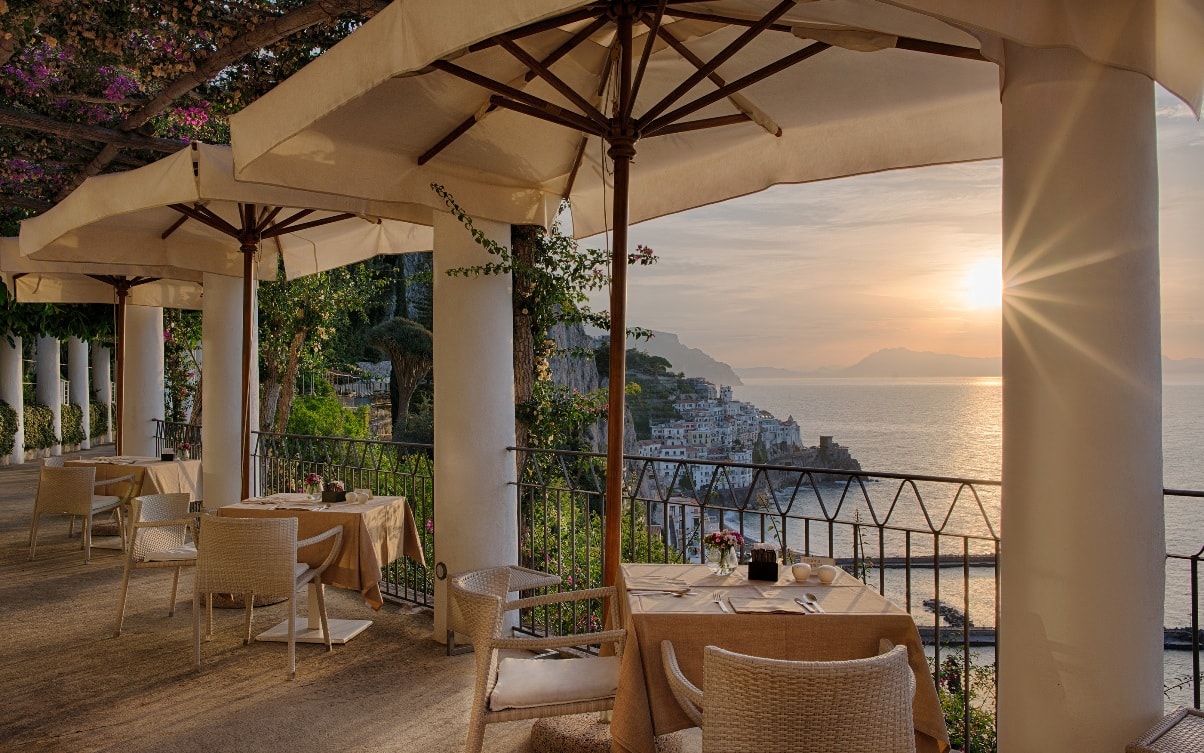 The Grand Hotel Convento in Amalfi, perched on a cliff 260 Feet above sea level, is one of the most suggestive hotels Amalfi Coast. The 5 star hotel, a reference point for elite tourism, stands on a monastery of which preserves the Arab-Norman cloister, the Loggia and the "Walk of the Monks". All rooms have a private terrace or balcony, so the view of the sea is assured! 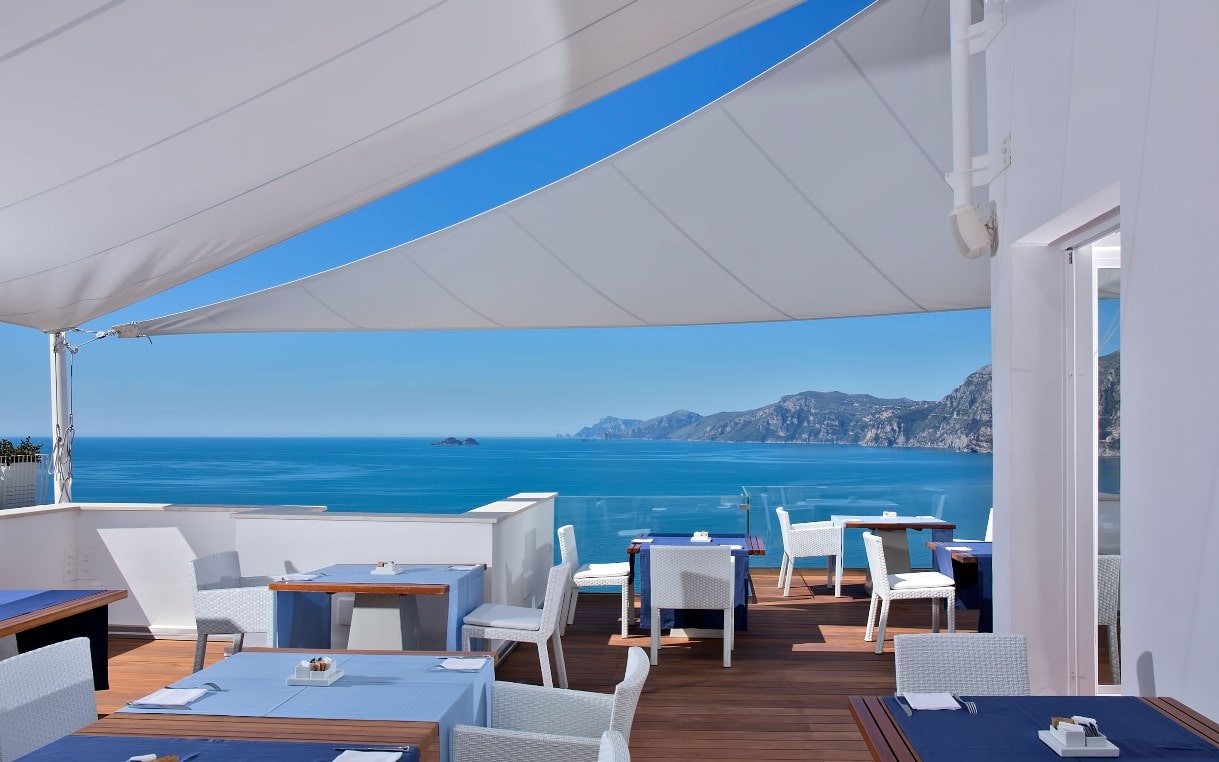 Absolute white is the dominant color, the color chosen to bring out the beauty of the surrounding landscape offered by Praiano. In addition to the beautiful white interiors, including the superbly maintained bedrooms, the best view of the Amalfi Coast is from the restaurant "Un Piano nel Cielo", a romantic rooftop restaurant, from which to enjoy a breathtaking view that embraces Positano, the island of Li Galli and Capri. 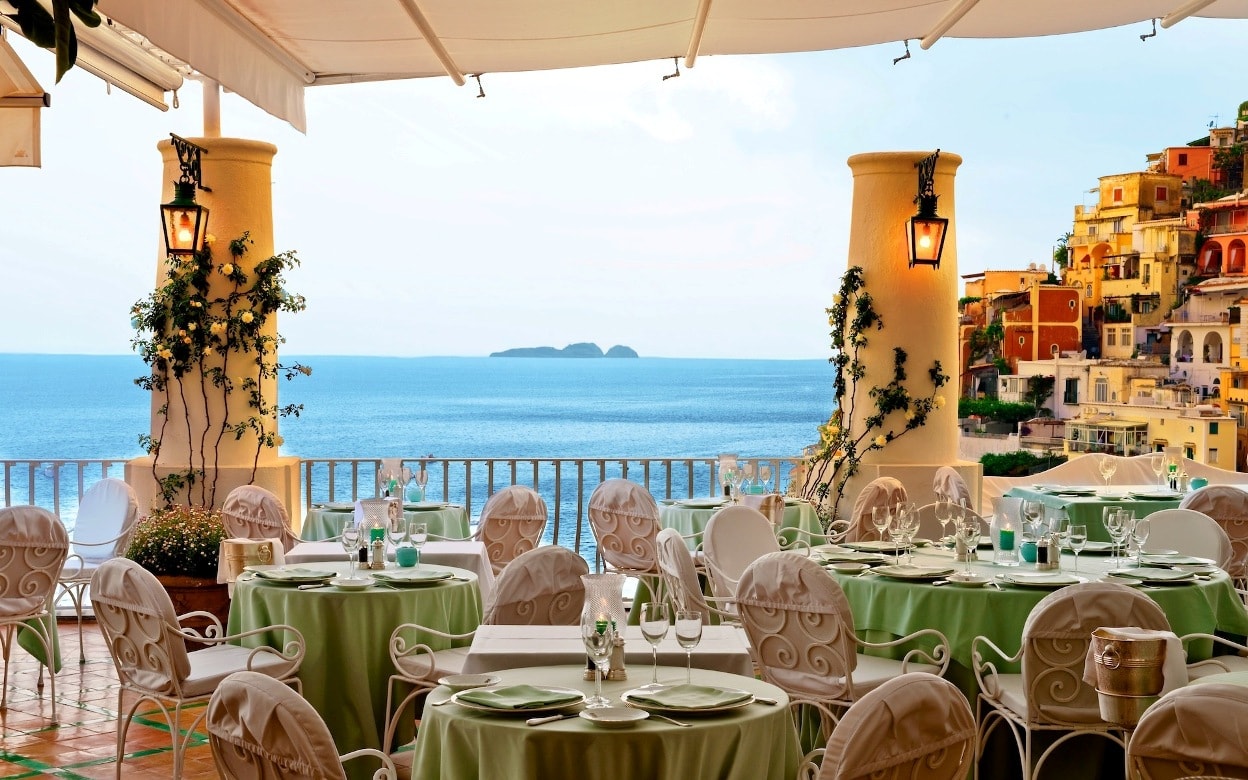 Among the most photographed hotels in Positano there is certainly the Hotel Le Sirenuse, created in 1951 by the Sersale brothers, who decided to transform their villa into a small charming hotel. Le Sirenuse is a wonderful location to enjoy the simple pleasures of Positano and the spectacular beauty of the Amalfi Coast. 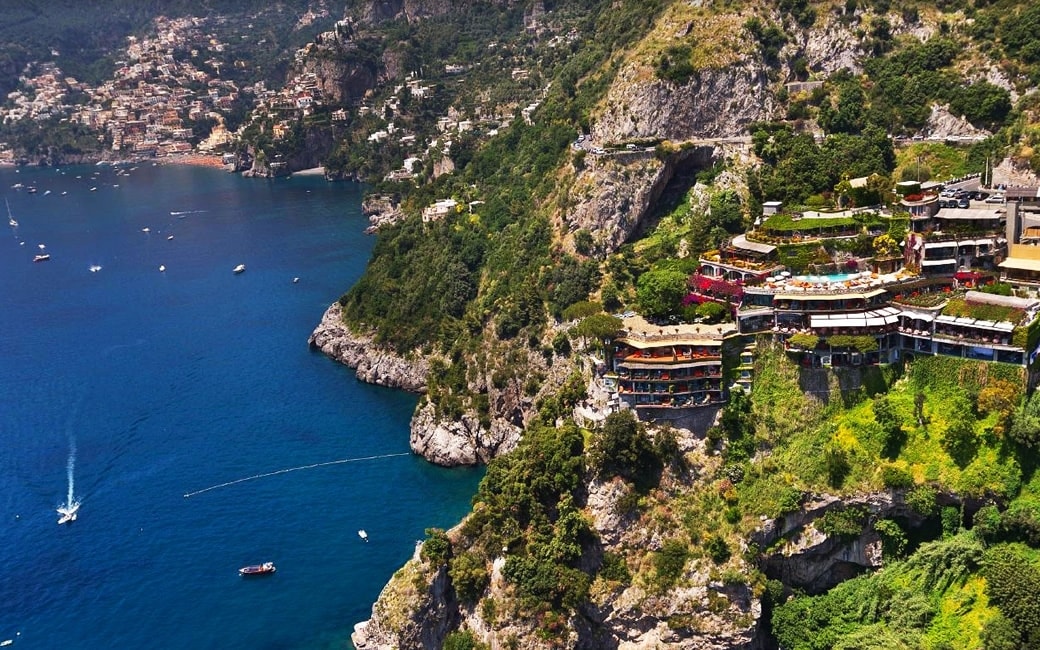 Many claim that the San Pietro di Positano is the best hotel in Positano, perhaps one of the best Amalfi Coast hotel. Impeccable service, spectacular views (all rooms have a balcony or terrace) and a unique area for sunbathing by the sea are just some of the ingredients that help to make your stay unforgettable on the Amalfi Coast. 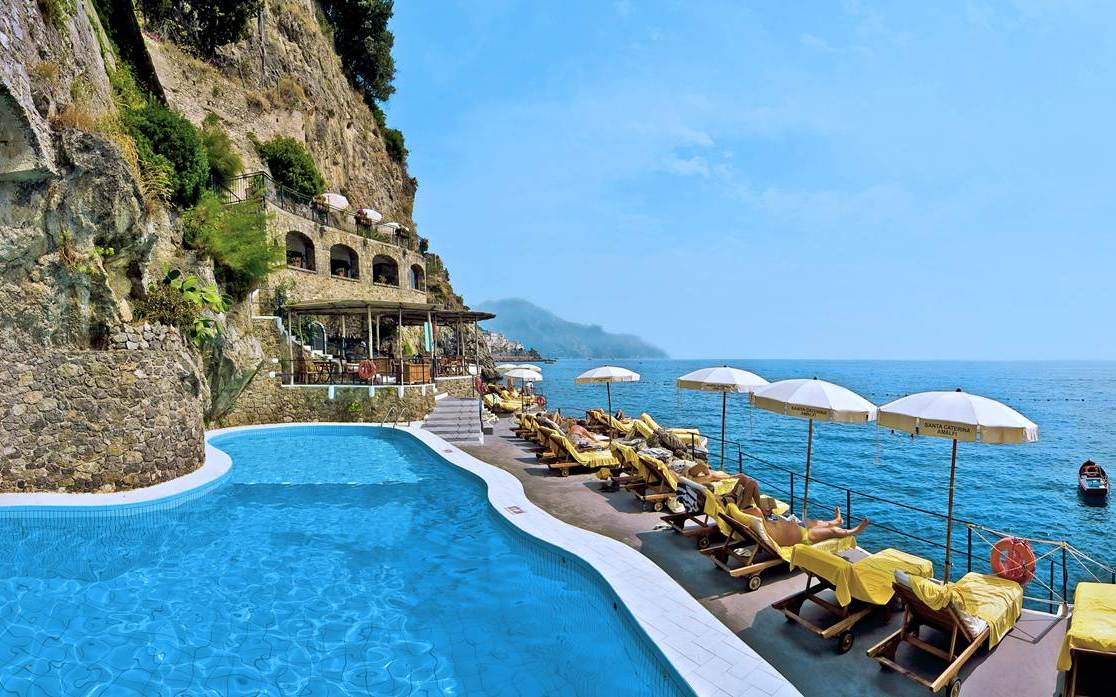 Among the best facilities to choose from if you are looking for where to stay in Amalfi Coast, at the top of the list is one of the most exclusive hotels in the town of Amalfi, the Art Nouveau Hotel Santa Caterina, surrounded by the blue of the sea and sky and colorful bougainvillea. The view from the swimming pool is certainly something fantastic! 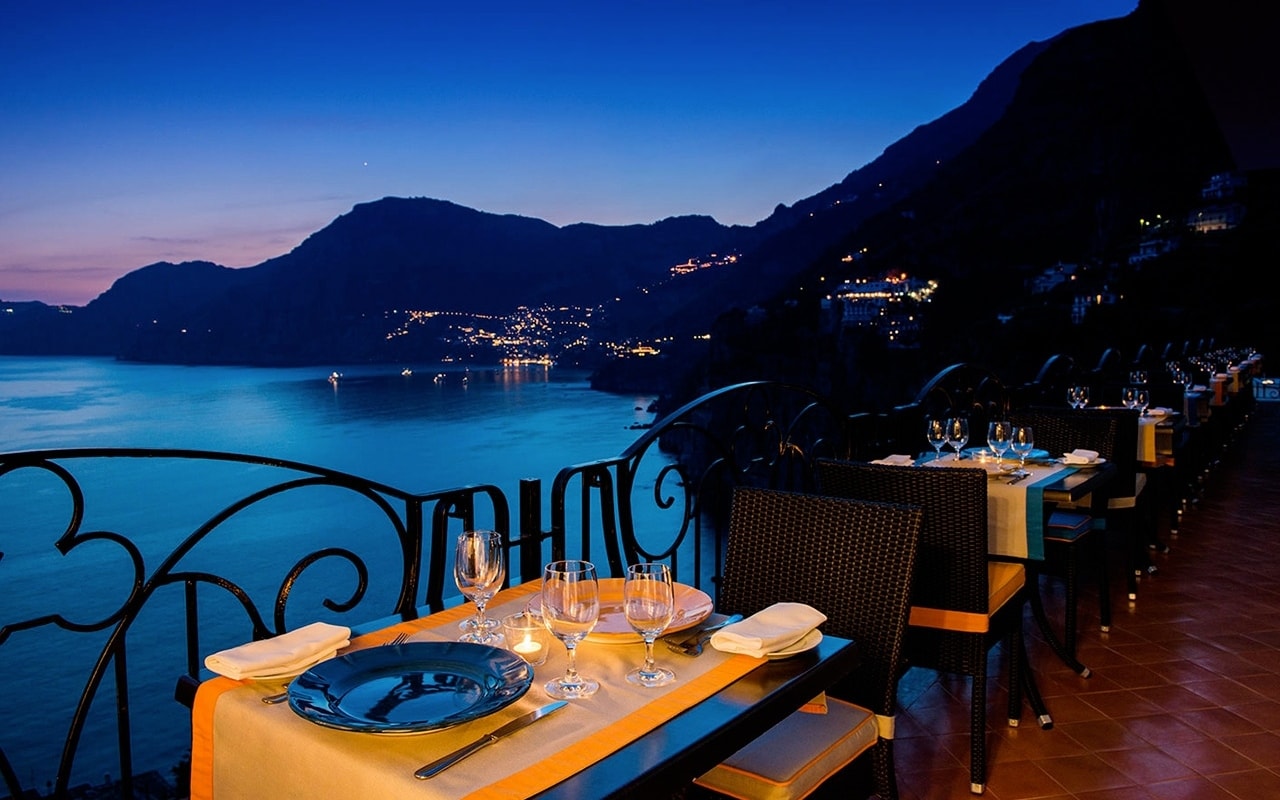 As the name suggests, from this hotel in Praiano you can admire an unforgettable panorama that embraces Positano, the island of Li Galli, all the way to the Faraglioni of Capri. So a name that is a guarantee, the hotel is a front row seat from which to admire the most beautiful sunsets on the entire coast. 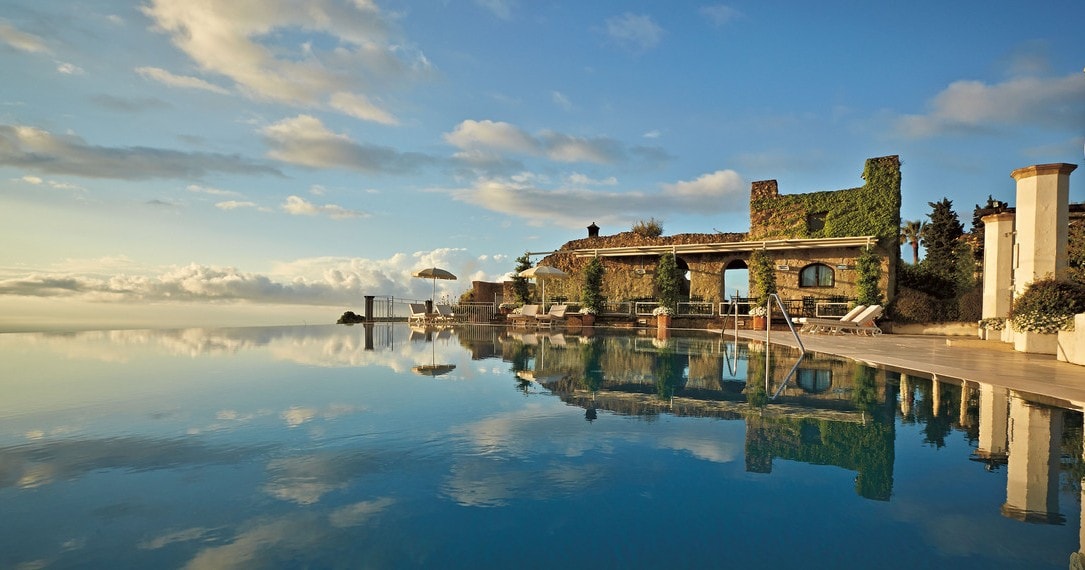 From the highest point of Ravello, the only one of the pearls of the Amalfi Coast not bathed by the sea, rises the stunning Belmond Hotel Caruso overlooking the deep blue Tyrrhenian Sea. This 11th century palace shines both outside and inside: colorful frescoes and Moorish arches adorn the facade, while rooms boast mosaic tile floors typical of the Amalfi Coast and, in many cases, beautiful private gardens. Every day the hotel organizes trips and suggests boat tours to discover the Amalfi Coast. 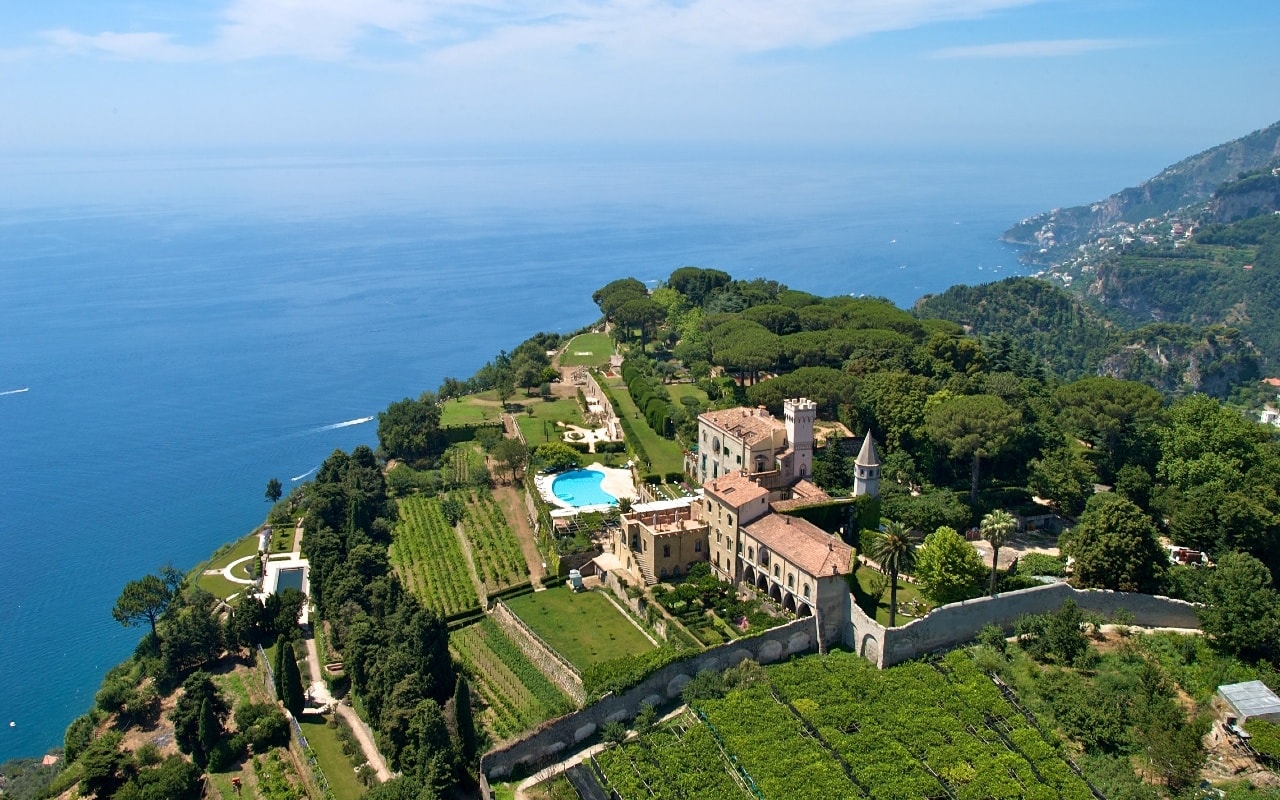 It would be hard to imagine a more romantic place than Villa Cimbrone in Ravello on the Amalfi Coast: surrounded by the fabulous gardens established by the English lord Grimthorpe in the late 19th century, which end with the unforgettable view from the Terrace of Infinity: the panorama of the belvedere of Villa Cimbrone is the most beautiful in the world, that when the sky and the sea are so vividly blue, you can't distinguish one from the other! The villa inside is just as atmospheric, with period elements and no less than 19 comfortable rooms. An luxury exclusive location with a Michelin starred restaurant and a beautiful swimming pool located in a jewel-like lawn.

The range of hotels on the sea front in the Amalfi Coast is wide, but the selection is difficult, so whatever your destination one thing is certain: you will not be disappointed by the breathtaking views and sea views that only the Amalfi Coast in Italy can offer..