Amalfi Cathedral is a 9th-century Roman Catholic structure in the Piazza del Duomo, Amalfi, Italy. It is dedicated to the Apostle Saint Andrew. Predominantly of Arab-Norman Romanesque architectural style, it has been remodeled several times, adding Romanesque, Byzantine, Gothic, and Baroque elements. The cathedral includes the adjoining 9th century Basilica of the Crucifix. Leading from the basilica are steps into the Crypt of St. Andrew. 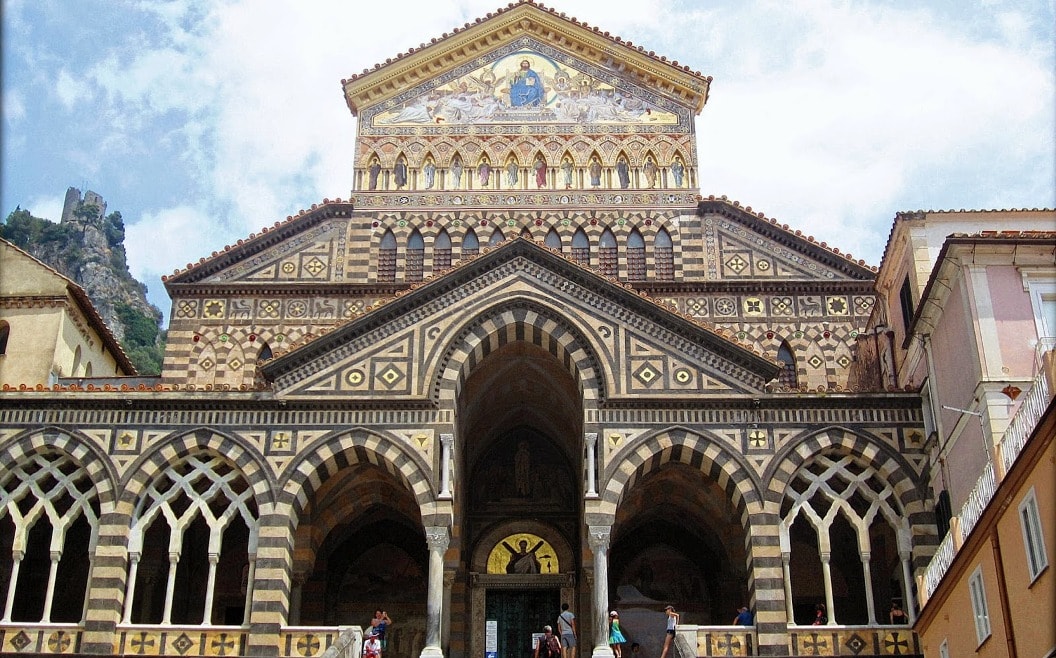 History of the Amalfi cathedral

The newer cathedral was built next to the older basilica that was built on the ruins of a previous temple. The remains of St. Andrew were reportedly brought to Amalfi from Constantinople in 1206 during the Fourth Crusade by Cardinal Peter of Capua. In 1208, the crypt was completed and the relics were turned over to the church. It said that later on Manna issued from the saint's bones.

A wooden 13th century Crucifix hangs in the liturgical area. Another crucifix, made of mother-of-pearl, was brought from the Holy Land and is located to the right of the back door. The High Altar in the central nave is formed from the sarcophagus of the Archbishop Pietro Capuano (died in 1214). Above the altar is a painting by Andrea dell'Asta of The Martyrdom of St. Andrew. The boxed ceiling dates to 1702 and its artwork includes the Flagellation, the Crucifixion of the Apostle, and the Dell'Asta's 1710 Miracle of the Manna. The triumphal arch is held up by two Egyptian granite columns. There are two additional twisted columns and two pulpits that were part of the 12th century ambo. One of the pillars boasts a hidden column as an example of the ancient Romanesque structure. 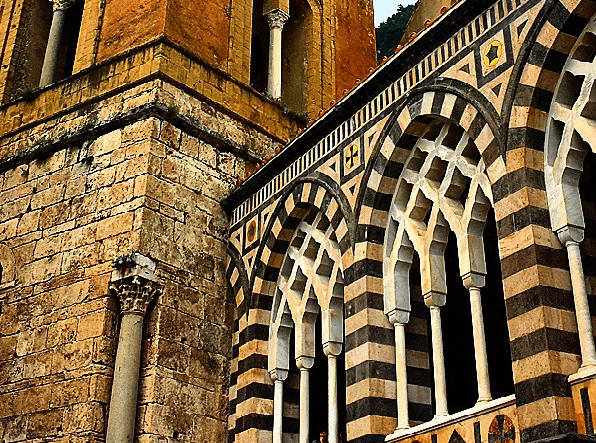 The front facade was rebuilt in 1891 after the original one collapsed. It is of striped marble and stone with open arches that have lace detailing not commonly found in Italian sacred architecture while the tiled cupola is quite common amongst churches of the area. The tympanum's mosaics portray “The triumph of Christ” in a work created by Domenico Morelli and whose original designs are retained in the Town Hall.
Sixty-two steps, wide and steep, lead up to the doors. Cast in Constantinople before 1066, and signed by Simeon of Syria, the cathedral's bronze doors are the earliest in Italy of post-Roman manufacture. Begun in 1180, and completed over 100 years later, the Romanesque style bell tower is off-center. The structure includes four small towers of Arab architectural type that are adorned with arches and are covered with majolica tiles. During times of war, the bell tower was purposed for defense.
The garden contains colonnades, arches and sculptures.