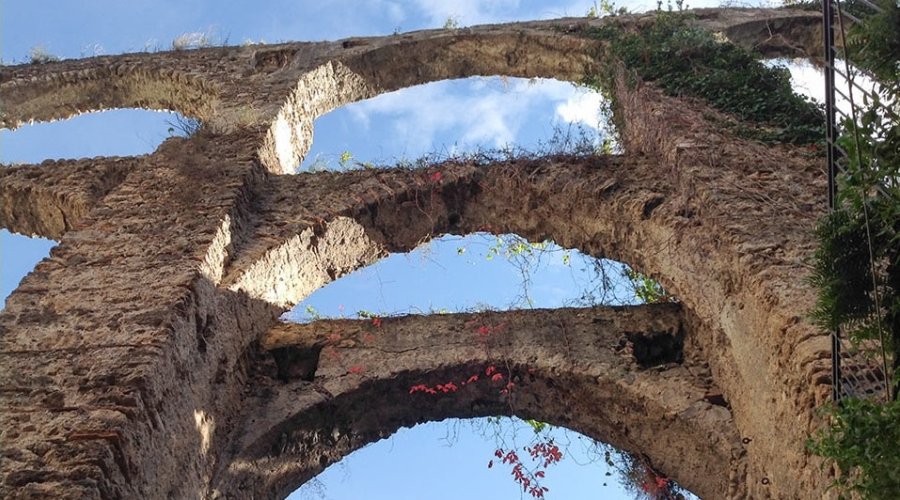 The medieval aqueduct of Salerno was built in the ninth century to supply water to the monastery of St. Benedict, at the eastern walls. It is located in the historic center of Salerno, under the hill Bonadies and its Arechi Castle.

It consists of two branches: one coming from the hills to the north, the other one from the high ground to the east of the city; both rejoined along the street Arce (which by their arches is named), at an edge of the old city walls. At first only stocked the Benedictine monastery, and later, a branch underground allowed to supply the convent of Piantanova, Via Mercanti.

The aqueduct was popularly renamed "Bridges of the Devil" and it was said that it was built in a single night, with the help of demons, by the magician of the twelfth century Peter Barliario. The popular superstition considered also that venture under the arches between dusk and dawn would bring to the meeting with devils or evil spirits.

The legend was probably inspired by the fact that the area where the aqueduct to the beginning of '900 was inaccessible (below the road surface the stream Rafastia flows) and free of housing, close to the highest sector of the city walls. Furthermore, the use of the ogival arch, real architectural novelty at the time, must have probably scared, and not a little, the emotional populace. Another legend says that under the aqueduct would meet accidentally, in a stormy night, the four founders of the School of Medicine: the arabic Adela, the greek Pontus, the jew Elino and Latin Salerno. This legend was instead inspired by the fact that at the time, thanks to its trade, Salerno was a crossroads of different peoples, religions and cultures.